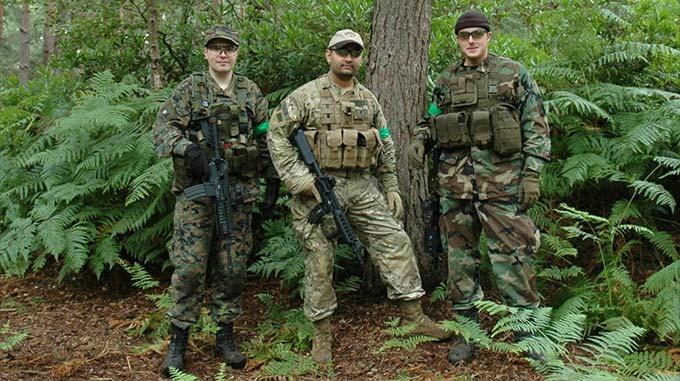 AOR2 and MultiCam are two of the most popular camouflage uniforms used by militaries around the world. They are known for their effectiveness in a wide variety of environments and efficient production lines and comfort.

In this article, we will discuss AOR2 Vs. Multicam different aspects of the two patterns and their features.

The AOR is an NWU series of military uniforms. AOR2 uniform is particularly used in the Navy and is a more durable and practical standard which makes it more tolerable and heavy-duty. MultiCam is another pattern of camouflage designed to be used in a wide range of environments.

MultiCam has a background of brown to light tan gradient, on top printed with dark green, olive green, and light green with that a layer of opaque dark brown and cream spread throughout the pattern.

On the other hand, there are currently two variants of the AOR2 pattern; this one has more shades of brown and tan color and is designed to wear on sandy, arid, and desert battlefield atmospheres.

MultiCam is best for bright green, daylight environments and works both in day and night time.

MARPAT is the traditional navy SEAL camo uniform mainly in the early 2000s in various operations. It was meant to distinguish the Marine corp from other military branches while also concealing its user from different backgrounds.

Even though it was superior to other prototypes back in the day, over the years, it was seen that even though it does the job of distinguishing the Marine corps from other military branches,  it could not effectively work as a camouflage compared to other alternatives.

It also started having an issue with heat resistance and fabric quality. AOR2 was proved to be more suitable in all cases and, hence, replaced the MARPAT.

AOR2 uniforms are one of the best camouflages for military special forces. These uniforms are made to last in the most lethal environment and withstand weather conditions and natural disasters.

These are built to use in a variety of environments and situations. The colors make it perfect for camouflaging in any bushy, wild region.

AOR2 shirts are made for the elite forces with high-quality fabric to withstand the harshest weather conditions. Keeping up in extreme cold weather and protecting from dust and snow, these shirts will also keep the body dry in heavy rain.

The shirts get molded in the body and move freely without any pull or stretch, and their durability makes them a good choice for military forces.

In several tests and experiments, MultiCam has performed better than MARPAT in having a more concealing pattern and uniform features preferred by soldiers, such as divided cloth parts and heat resistance.

And here is a good post if you are interested in learning more about the difference between marpat & multicam.

With the proper manufacturing, this camo can endure the most challenging situations.

AOR2 uniforms are one of the best camouflages for military special forces. These uniforms are made to last in the most lethal environment and overcome weather conditions and natural crises.

These are built to use in a variety of environments and situations. The colors make it perfect for camouflaging in any bushy, wild region.

AOR 2 camouflage uniform is the navy SEAL adopted workmen’s uniform from 2016. It is used as a standard uniform for officers and higher officials for the SEAL and navy. It is perfect for tropical environments.

AOR2 camouflage uniform is divided into a blouse part, a trouser part, an eight-pointed cap, and a Boonie hem.

Multicam alpine is the variant of the original Multicam pattern specifically optimized for snow environments and locations with predominantly white backgrounds.

It is great for use in regions with higher altitudes where it is more likely to have snow for most of the year. It can easily blend into the snow and is very difficult to be detected.

What is AOR2 camo?

It is a camouflage NWU (Navy working uniform) that is designed for woodland scenarios. This model of uniforms has been used in recent years for navy SEALS in tropical regions and green areas of operation.

These help the soldiers blend in the green background convincingly and be hard to detect by trained and untrained eyes to detect camouflages.

What is AOR1 and AOR2: Difference and Similarities

AOR1 is the camo design meant for desert situations in the AOR series, whereas the AOR2 is designed to be used in green tropical backgrounds.

AOR or “area of responsibility” camouflage series has two different options to choose from for use in arid terrain/desert areas or forested tropical green geographical locations. They both have some common features.

AOR1 has more soil-like color combinations that can easily get mixed in a desert environment where the soil is brown-red and not much green is present. The AOR2, on the other hand, is green in color, resembling the color of living plants in tropical woodlands.

Yes. Since 2016, SEALs have announced replacing the dark blue uniform with the green AOR2 camo approved by DevGru. Now the majority of the members of the force in action use some variants of this model.

Multicam is a form of military camouflage pattern known for its effectiveness in various environments and backgrounds. Crye Precision designed it. It has seven colors and a unique camo pattern embroidered in it.

Multicam Effectiveness: How effective is MultiCam in different environments?

The MultiCam pattern was made to decrease the users’ visual and near IR visibility in a wide range of environments. To achieve this, they have different versions of the product, Such as  MultiCam Arid, MultiCam Tropic, and MultiCam alpine.

The arid version is meant to blend the user in environments consisting of sand and rock in open space. The Tropic variant is intended to hide the user among jungle bush contexts, while the alpine model can excellently disguise the user in white snowy backgrounds.

All of them have excellent reputations for being very effective in the desert, tropical, snowy environment, and deployed by military agencies of many countries in real-life actions.

No, navy SEALs do not use any directly licensed variations of the Multicam camo design, even though the AOR2 camos used by SEALs have some similarities in pattern design with Multicam.

Read more on – Camouflage Flecktarn Vs Multicam: which is better?

AOR2 stands for Area of responsibility 2. It is a camouflage design for woodland areas. It is used by navy SEAL professionals in woodland green tropical regions. It is specifically common in the Philippines, where the soldiers fight Al Qaeda terrorists.

#2. Is Multicam better than MARPAT?

MultiCam and MARPAT are great camouflage patterns, each more well suited for different backgrounds. MultiCam is powerful in tropical regions where the wood and green are light and more reflective, while MARPAT performs best in green areas with darker shades and brown areas, regions with more mud. However, as MARPAT isn’t available to civilians, the replicas are less likely to be as good.

#3. Is Multicam better than Woodland?

MultiCam is usually an excellent camo for a wide variety of environments. If the region is notably darker and low-light, M81 woodland might be in some cases better than MultiCam. Still, except for the specific areas and conditions, MultiCam generally is the better camo between them.

Yes, in many countries, MARPAT is used for different ranked officers in military agencies. Even in the USA, for any specific posts and agencies, MARPAT is still used. It is used mainly in tropical jungles with darker shades of green and brown.

#5. Is Multicam good at night?

MultiCam is said to be one of the best camouflages for nighttime. It is better to have darker shades of brown, yellow, khaki, green, olive, neutral grey in night camouflage, and MultiCam seems to meet all the rules. MultiCam has better performance than other variants in most atmospheres.

Choosing the proper mask for the night is very important, and so is preparing it. You might want to hang it dry in woods or someplace bushy to avoid smelling like detergent or food, especially when hunting.

#6. Can I wear Multicam instead of OCP?

If you are an army official, then it is required that you only wear uniforms issued by your authority in a given time frame. MultiCam is a commercially available camo pattern that the military directly doesn’t use.

MultiCam pattern is adopted in the scorpion OCP, but it has a difference in splotches orientation. MultiCam tends to have them vertical, while OCP doesn’t have it that way. If you are a non-professional user, you can choose the more convenient uniform for you.

MultiCam’s main variant isn’t black, rather tropical and arid. However, a black version is available for use for more professional looks and stylish purposes.

They are not meant to be used in daylight front battle situations. Instead, they are mainly to be used in nights and office environments where no combat is imminent.

#8. What is AOR2 in spousal sponsorship?

AOR2 means ‘acknowledgment of receipt 2’ in spousal sponsorship. It is a step in getting PR in Canada. The authority issues AOR2 within 2-3 months of the application to inform the applicant that the application package has been received and sent for processing.

Conlcusion on AOR2 Vs. Multicam

Who is the winner in the debate of AOR2 vs Multicam? The MultiCam has proved its ability to work in different environments and has provided one of the best camouflages in a wooded and desert environment; it can also operate in various seasons, lighting conditions, and elevations. Whereas the AOR2 is meant to be used in green tropical backgrounds.