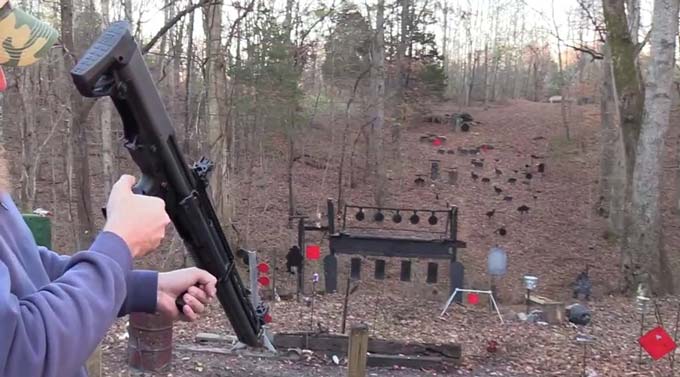 KSG Shotguns by  Kel-Tec are one of the most powerful weapons. But they come with several issues that the customers asked for immediate solutions to.

But before start check sights for the KSG shotgun as you know the Kel–Tec KSG comes with rails, but no sights.

The outer surface, cross-bolt safety, and the lower rail are both made of plastic that is of low quality. This means that the materials are susceptible to breaking while in use. A powerful gun that is built for heavy-duty work won’t survive much with a cheap plastic build.

It isn’t easy to operate the KSG with little effort. When the trigger is pressed to eject a bullet, sometimes, the user may get hurt. The shells are released from the back of the main pistol grip, where the user places their grip. Users don’t desire to have a painful experience while shooting with a KSG.

After a few rounds of shooting, the KSG stops loading sometimes. If the user loads low brass shells into the magazine then the shells get jammed inside. For this reason, the shooter needs to manually open inside to remove shells. This problem halts rapid firing when needed.

If anyone wishes to load A-zoom snap caps in the KSG, they have observed that this jams inside quite easily. In addition, it is hard to cycle them inside. Some think that the issue occurred because of the weight. KSG isn’t adapted to load heavy items, which might create inconvenience.

Apart from the jamming problem, some users also faced troubles with loading shells that stuck into the mag tubes. Mag tubes in the KSG aren’t well-built that need fixing immediately. This problem would hinder automatic bullet firing with frequent manual loading of bullets.

Although Kel Tec’s KSG is quite popular among shooters there are a few issues prevalent in this shotgun. As it is quite an expensive weapon, these issues are a major concern that needs to be fixed to make it more reliable.

KSG seems risky without a vertical grip as the pump is very close to the barrel. While shooting, the hands may slip and come to the barrel where the bullet is released.

Many users have complained about how the KSG causes painful shootings. So, a vertical grip is added to solve this problem. But this makes the gun bulky to carry.

Several problems still remain unsolved with Kel Tec KSG 7. The most common ones were the frequent manual cycling due to shells getting stuck inside, no space for a vertical grip, and the high recoil.

It gets difficult for shooting continuously or keeping focus when the shooter has to manually remove shells. A vertical grip would make the gun less risky.

PLR 16 has shown troubles with ejection, due to severe jamming inside. It seems that a particular round is compatible with this shotgun, otherwise, it isn’t very efficient. In addition, the gas piston has too much friction. As you fire the round, it isn’t released smoothly.

KSG 25 is shorter in length than other shotguns. Moreover, the shotgun also has the same problem of jamming, so needs constant cycling to make smoother firing. Cycling removes parts of shells from the inside to make the mechanism clear.

Similar to other KSG shotguns, PMR 30 also has feeding problems. Initially, it seemed as if only certain ammo caused this problem with the shotgun. Even if the loading is done, the ammo causes jamming. However, recently some users find that the issue is with all the ammo, so, this shotgun needs a good loading mechanism.

Even with several amazing features, the KSG shotgun still has some drawbacks. Firstly, KSG is slightly shorter in length than other shotguns, so it causes some risks during shooting.

The user doesn’t get enough space for a grip. In addition, the plastic build and ejection are also not satisfactory.

One of the most common complaints of KSG is the severe hand injury caused during the shooting. Shooters don’t get enough space for a good grip, and the hands might slip when the trigger is pulled.

During the shooting, users can’t always remain careful to keep their grip in place. To prevent KSG hand injury, a vertical grip is added, but the gun becomes bulky.

Another very widely complained problem is the feeding issue with KSG. Either the loading of new shells isn’t smooth, or the shells get jammed inside the shotgun. After fixing the magazine the first round is easy to feed, but the second one doesn’t load without clearing the magazine. Some think that this problem arises because of the loose switch selector.

Due to several complaints, Kel-Tec has responded and upgraded their KSG to fix some issues. However, some of the problems still remain.

The users try some solutions like a vertical grip, metal selector switch, or manual cycling to remove shells. But the shooters still hope to get more KSG solutions from Kel-Tec.

Is the Kel Tec KSG Worth Buying?

Undoubtedly, the greatness of the KSG outweighs all of the issues. Kel-Tec created this shotgun as a very powerful and versatile weapon. It can hold around 25 rounds at a time and release each one with high velocity and accuracy.

In addition, the shotgun allows an effective range for a variety of tasks. So, this gun is still worth buying, ignoring the issues and price.

Is the Kel Tec KSG legal?

Fortunately, KSG is legal in all states due to its features. Since the ammo, barrel, and Picatinny rail are at the standard level, the state laws allow everyone to use it. The length is short to make it legal and not a dangerous weapon.

Kel-Tec is one of the well-known gun companies due to its exclusive products. They have made KSG one of the powerful shotguns that will soon replace others in the market.

Their products are at a reasonable price with good quality. They are very successful in selling their products and maintaining the quality, even with some issues. We can’t deny that it is a good company.

How much is a Kel Tec worth?

Kel Tec uses polymer design to make their guns. Since they only specialize in gun manufacturing, they attempt for innovative technology to attract customers. The materials and quality are worth buying.

Kel Tec KSG problems aren’t new to any user, but every time old users try to find effective solutions. They help others to make the KSG more efficient. But every user praises the various wonderful features of the gun.

So, even the shotgun comes with some issues, they are solvable, and the advantages are more to ignore the problems.